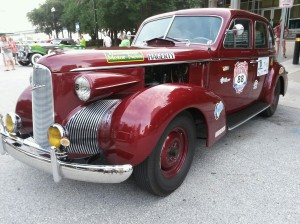 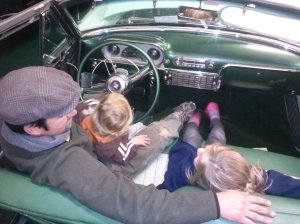 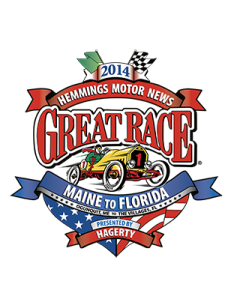 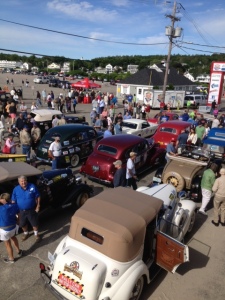 Last Saturday Darcy and I dropped Parker off in Lowell to begin the Great Race, which is a classic/antique automobile road rally that stretches from Maine to Florida.  It is a timed event where you are not allowed cell phones or GPS, just someone that you can trust to navigate and a car that can you from point A to point B.  Parker was part of what I call the ‘pit crew.’  He and another had to travel down the coast with the truck, tools and trailer ‘just in case.’

At the end of every day the cars are available to be viewed until 8 PM and tons of enthusiasts show up to enjoy the event.  This meant that Parker was up late many a night working on the car.  His buddies George and Andy raced with a 1939 LaSalle.  Anyone that was at our wedding would remember this beauty as she was the car that we left in.  She held her own for the first several nights, but weather and lack of time in the end started to wreak some havoc.  Last night I was texting Parker text and diagrams out of one of his many reference manuals so that he could work on the carbeurator.

This was the first time that Parker had participated in the Great Race and the first time that he had been away from us for so long a period of time.  By Wednesday, Parker was having a pretty hard time as he watched father and son racing teams and saw little boys playing the cars.  The team was aptly named ‘Benny’s Bunch’ and they wore our shirts, with that beautiful picture of our little dude smiling on the back.  At the end of every day the announcers would say that Benny’s Bunch was racing for a 2 year old boy who loved cars.  That’s the understatement of the year.  Benny was obsessed with cars and was with me at Parker’s shop at least 4-5 times a week, in and out of every vehicle that came through.

The team was holding their own and doing ok, by mid week they were ranked around the middle of the pack.  Parker started asking Benny for help just around the time that the LaSalle was acting up.  Suddenly, George and Andy’s runs were going smoother and they actually got Aces (I’m not entirely sure what the jargin means, but it’s somewhere along the line of a perfect score) for the day’s times.  The car was smoking and having all sorts of troubles, but they were able to improve upon their times and finished in 24th place overall (out of 100+ entrants), getting 6th place in their class.  It was an emotional week for Parker, but Benny was there, I know he was, there was no place else that kid would rather be.

Last night, for the first time since he passed, Parker dreamed about him.  This had always bugged Parker.  I had dreamed about him within a week and received so much comfort from it.  He held Benny’s hand and all that I can think of is the the sunflower painting.  At today’s finish they announced again about how Benny’s Bunch was racing for a 2 year old that loved cars and a random stranger asked Parker what they were talking about.  So he told her about Benny and turned around to show her his shirt as he started crying.  This woman started crying and just gave Parker the biggest hug.  We have found so much comfort in the love of strangers.  Here was this woman doing for me what I have been dying to do all week and I’m so thankful for her love and support in a time that Parker needed it most.

I never doubt our little guy.  He’s been busy these last few weeks.

4 thoughts on “The Great Race”