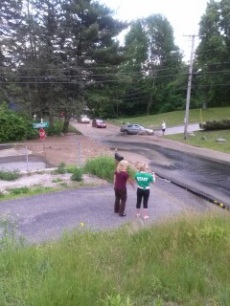 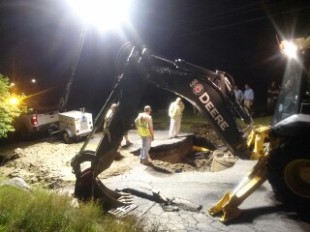 Tonight during dessert I was walking into the living room when I heard what sounded like pouring rain from the playroom.  When I looked out the window, there was a river flowing down Chester Street.  Darcy and I ran outside and saw that there appeared to be a water main break on Chester Street right outside the front of our house.  We watched as the water flowed down the hill and the road began to buckle in the center under the pressure.  I called 911 and we waited.

Meanwhile, Parker was held up at work, one of the cars wouldn’t start, so he couldn’t get it back into the shop.  I called him to warn him about what was going on and told him that he wouldn’t be able to get into the driveway.  People kept driving up and down Chester Street, it was scary to watch.

By the time Parker was home, things had gotten a little out of control, the road was buckling, we could feel the water running below our property.  Chester Street actually lifted and silt, rocks and sand began to wash down the road and the water began to flow onto our neighbors lawn and was headed for his foundation.  Parker helped to create a temporary plywood dam with some of our neighbors and Darcy (who I had left in the yard to help) began to get hysterical.  She kept saying that she wanted me, I’m sure the whole thing was a little scary for her.  The police showed up and I stood there gaping.  Here we were again.  People crowded all around our street and the police blocking traffic.  It was a lot to take in at first.

As time passed, the street and our driveway began to buckle considerably.  A large section by the main break fell inward and the hole kept getting larger.  It was kind of hard to ignore the fact that this was happening right outside of our home, right where the accident happened.  It was hard to disregard the fact the street was destroyed from right up above where the accident occurred down past Bjorklund.  I couldn’t overlook the fact that the base of our driveway had folded in upon itself, right where the car had hit us.  I wasn’t able to ignore the fact the curb and the lawn where they brought Benny to give him CPR had washed away.  It was gone, ruined, destroyed.

I just kept wondering, what are the chances?  How is it possible that this had all just been washed away, vanished?  It was like we were being given a clean slate, the ability to actually not have to look at the spot where he died on a daily basis.  This to me, was a sign, I was sure of it.  I hated the fact that the accident happened at all, but the fact that happened outside of our home made it that much worse.  It was all gone, the physical landscape where it all occurred.  I’m convinced that Benny had a hand in this.  The fact that our neighbor’s daughter (who we’ve never met) happened to be wearing a Benny’s Bunch shirt when she came down the street on her bike to check things out isn’t lost on me.

There is a crew breaking away and removing the pavement outside of our house right now.  There is something so healing about standing there and watching them take it all away.  It is as if this water break washed away everything that happened.  I wish it were that simple.  At least I know the little guy is still up there still causing mischief.