So, as I’ve said before, my heart wasn’t really in the walk this year. Believe me, I’m not proud to admit it, but it is what it is. All of a sudden losing my mom at the age of 49 didn’t seem like the greatest tragedy anymore.

Sure, I trained, but I think more to get me up and out of the house. It gave me something to focus on other than the tragedy that has become my life. Sure I raised the money (and then some) because we are blessed to have some amazing people in our lives. I couldn’t believe that after all of the support that we received following the accident, people still donated to my 3 Day walk.

So, if I’m being honest, I wasn’t really excited to walk. It felt weird to be there to try to raise money for cancer when someone can die in a car accident just as easily and there’s not a thing that you can do. I was very conflicted this year. How do I honor my mother and grieve my son simultaneously?

Opening Ceremonies hurt. I stood there amongst survivors and those who had lost their mothers just like me and I felt horrible. How can I grieve for a woman who lived 49 years (which now seems long to me, amazing what a little perspective can do), when my son didn’t even get 18 months? How can I even begin to wrap my head around it? I really wanted to leave. I was ready to admit defeat and walk away. It no longer felt like my battle. There was so much sadness and all that I could feel was everything that I had lost.

What kept me there was all of those donations, all of those people that I felt that I had made a promise to. So I walked. Day 1 was rough to say the least. I blame it on the fact that Tara is now 30 and this has caused both of our bodies to age. Truthfully, I think we both had a shit year and probably weren’t ready to deal with the walk not only physically, but mentally, but we forged on.

I didn’t expect Bennett to be there, I should know better by now. I had noticed as we were walking several different banners with sunflowers. I smiled and took it for the sign it was. As we were crossing the street, I went to look closer and stopped dead in my tracks as I noticed the dates on the banner-the day he was born and the day he died. Tara had to yell at me to hurry up and take the picture because the light had changed and I was still in the middle of the intersection gaping at what was in front of me.

Mind blown, once again, but it was yet another sign from the little guy that I was where I was supposed to be. We then passed by the Bennett Arboretum. Sign number 2. 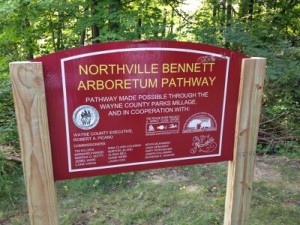 Our tent number, just happened to be B-88, there was that number again, this time preceded by the letter B. Never mind all of the coke cans that read ‘Mom’ or the fact that the only song that I heard at the last pit stop on Day 3 was ‘Carry on.’

We walked through crowds of people, all cheering us on. People were on the side of the road handing out tylenol, water, soda, jello shots (!), you name it. They came out in droves to support us walkers. I’ve walked Boston for 9 years and I have never seen anything like the community support that showed up in Michigan (sorry Boston!). The crew was phenomenal and so encouraging. It made those first 22 miles bearable.

When we made it camp that first night I felt relieved. I was beginning to remember the joy that comes out of being involved in an event like the 3 Day. We sat down to dinner and watched the different entertainment that was on the stage. Up walked a woman that was 32 and stage IV – perspective. She was diagnosed at the age of 29 with Metastatic Breast Cancer – perspective. She was emotional, she was scared, she was inspiring. The light bulb dinged and suddenly I remembered why. I remembered that I did this walk to heal from my mother’s death, but it has become so much more to me. I remembered that this wasn’t about me or my son, but something so much bigger (that was a hard pill to swallow, not sure how long it will last). I remembered why I walk, why this is so important to me. I had to look outside my own grief, which wasn’t easy once it’s become a part of your every day life.

Then I looked at my life. What if I had been diagnosed at 29? How would Darcy’s life be? Would there even be a Benny? For the first time in a longtime, I actually felt grateful – perspective. Now I’m not going to tell you that Days 2 & 3 were a breeze, but remembering why I was there, feeling it in my bones that I was 100%, absolutely where I needed to be made it easier to carry on.

It was a good weekend. It was a good reminder to me that there is life outside of my grief. Sometimes we’re just so blinded by it, that we can’t see. It was a glimpse. Now that I am home again and on the other side, it sucks. But I will hold onto everything that that 32 year old woman said to remind me why I walk.  In this instance, I was not powerless or helpless.  I could fight back, I could walk.  I don’t know yet how to ‘fight back’ after what happened with Benny, I’m not sure if I ever will.  I think that’s going to be one of my biggest obstacles, feeling powerless.  At least for one weekend, I had a little perspective, a little breather from the endless grief.  Thank you 3 Day.  Thank you mom and Benny for keeping us moving.

About 8 years ago, my 3 Day walking team and I put out a cookbook. I was going through it tonight looking for something and found these words that I wrote,

“sometimes people just pass through our lives and only stay long enough to make a difference.”

How very true indeed. When I think about all of the lessons that my children have taught me about life and love I feel lucky. They changed me, they changed my marriage and they made us a family. They made my life whole.

So my life is a little bit more like a donut now, there’s a big piece missing from the center, my munchkin is gone. I never thought that I would have a boy, it seemed such a foreign idea to me because I had two sisters. It hurts to remember all of the laughter that that little boy brought into my life. How coy he was when he smiled and how ridiculous he was when he tantrumed (it really was quite funny). He made me so happy and balanced out his sister. They were yin and yang. Maybe it was because they were so young yet, but they rarely fought. Most of the time Benny had Darcy in stitches, laughing hysterically over some antic that he had pulled. He was a performer and comedian and could have done so many amazing things with his life.

Today I was cleaning in my room and Darcy was behind me every time I turned around. I finally told her she needs to learn to play by herself for a little bit. I was picking something up off the floor when she said to me, ‘it’s because I don’t have a brother anymore to play with.’ It was a good thing that I was bent over so that she couldn’t see my face. How does one even respond to that? It was like someone physically stabbed me, it hurt so much. I wish I can make it all better, but I can’t.

Benny taught me happiness and laughter. Everything could be funny with him around. He taught me about patience like never before. He taught me about having a little boy and loving a son. Mostly he taught me life is short, there are no guarantees, how presumptuous of us to assume that there is a tomorrow. His life changed me, his death changed me. I miss the laughter and smiles. I miss Darcy’s playmate.

This year I’m going to do the Breast Cancer 3 Day – again. Over a decade ago I started this journey for my mother as I tried to wrap my head around why I had to say good-bye to her so early. I signed up by myself and took a deep breath. I wasn’t the type to take on something new by myself, so this was a huge step for me, but I was committed.

The most amazing thing happened during that first walk, I met some of the most amazing women. This feels like an understatement. I have spent the last 10 years walking, sharing, crying and laughing with these ladies. We created our own little family in which we raised our kids and continued to grow closer. These ladies and their husbands sat by our sides, held our hands while we cried in November and helped to take over arrangements. I cannot explain the type of bond we have formed. I am forever thankful for my BFF family.

I know now that I NEED this walk. I need something to work towards. I NEED to not give up. I switched cities so that I wouldn’t have to face my fellow 3 Day walkers that are familiar with my kids and so that Tara could walk with me. It will be weird, to not be surrounded by my Boston 3 Day friends, but I’ve accepted it. It will be awful to not see Benny cheering me on in pink alongside his sister.

My kids are such a big part of this walk. As much as I do it in my mom’s memory, I always got involved because I was so scared that my kids might one day lose me to cancer, I never in a million years thought that I might lose one of them. I need to find a purpose again, to remember what I started all those years ago and why it’s still important to me.

It’s with a heavy heart that I walk this year. Will it be hard, yes, it will truly suck. I feel robbed again by life. This walk is such a symbol for my life now though, putting one foot in front of the other. http://www.the3day.org/goto/sheri2014

A community for writers & readers